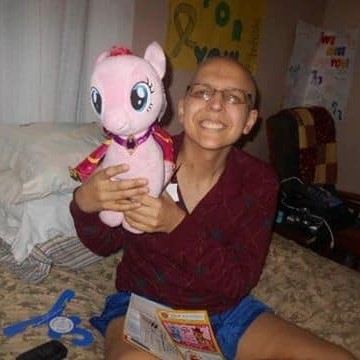 Silas Martin was a Brony (Brotherhood of My Little Pony Lovers). Look it up – it’s even on Wikipedia! Mostly teens and college guys, a Brony probably has an amazingly gentle, kind spirit – even if he looks tough on the outside. Early in Silas’s last year of life, he was offered a “Mini Wish” to go to an anime convention in southern Illinois. He was psyched! He asked Mom to take him and two of his older buddies. There were vendors, breakout sessions for Q & A, and fake martial arts fighting (with foam sabers)! People dressed as their favorite characters abounded.
We took so many pictures. Silas in his walker seemed to attract the gaming characters in costume. Most often, they would stay in character, not speaking no matter how much Silas prompted and prodded. He especially loved the gentle, quiet fox (wolf?) wanting his picture taken with her – without his walker!
Silas also had a love of Japanese culture – and FOOD! $500 to spend at an Japanese restaurant all weekend? He was in heaven. In typical “Silas style”, he shamelessly flirted with our waitress, whom he requested all weekend! At one point, the sliders on Silas’s walker gave out, sticking the walker legs to the pavement with each step. I ran out to Kmart and found CONVERSE TENNIS SHOE SLIDERS! I’m glad I bought two pair, as they quickly became Silas’s “signature” as well.
The best memory I have of Silas as a Brony was made while he was on hospice, which lasted about a month. About a week into hospice, Silas requested that (after he was gone) I give all – ALL – of his MLP (My Little Pony) paraphernalia, posters, tiny figures, large stuffed figures and more to DOVE, Inc. a local women’s shelter. Dove provides a safe haven from domestic violence for women and their children. Silas said MLP represents kindness and gentleness, and he wanted that for the children who would come through there. He wanted the shelter to give his MLP’s to the children to keep.
A few days later, he asked me to call our friend, Cheryl who worked at Dove. He wanted her to come over right then, so he could give all of it to her in person. I held back the tears as I scrambled through the house, gathering up all the ponies I could find!
It was a bittersweet once-in-a-lifetime moment, seeing the pure joy and gratitude on Silas’s face, as he handed her a couple of the items himself, with his right arm. His left arm lay lifeless at his side, but his whole heart was in action as he hugged her tight with that right arm as well.